Taking over the streets of L.A. with his versatile delivery and snappy one-liners, Bravo The Bagchaser is the latest name to watch in his city’s rap renaissance. Coming through with an accomplished full-length, Bravo shares Born 2 Win, his new album. Expanding Bravo’s repertoire of flows–he expertly uses behind-the-beat flows, lockstep cadences, auto-tuned melody, and others when the mood strikes–Born 2 Win is an ultra-confident and effortlessly engaging slice of L.A. rap. The album hops from style to style, but never loses Bravo’s signature mix of earnest ambition and disrespectful attitude, featuring highlights like the riders’ anthem “Slide For Me,” the glistening electro-funk “Too Many Problems,” and the club-ready single “Get Rich” ft. AzChike. Featuring additional appearances from Fenix Flexin, White John, Memo The Mafioso, and AFN Peso, Born 2 Win is available to stream across platforms.

Since making his mark on the scene in 2018 with his appearance on “Let You Know” by BLE$, Bravo’s been one of the hottest young rappers in L.A. Born in Granada Hills, but raised in South Central, the rapper ran up a string of street hits, racking up over 1 million YouTube views on videos like “Racin 2 Da Checc,” “Know Better,” “Bag Right,” and “Trappin N Servin” by Bravo’s late friend Au$tin The PacMan. The young rapper is a frequent collaborator with Fenix Flexin of Shoreline Mafia, who teamed up with Bravo for “Bravo Flexin” (4+ million views), “Quarters,” and  “Keep It Real,” and invited Bravo on a co-headlining West Coast tour earlier in 2020. Bravo recently hopped on the remix “Pippi Longstockin” by incarcerated L.A. rap icon Drakeo The Ruler, who sang Bravo’s praises in The FADER. His debut album and the direct follow-up to 2019’s Racin’ 2 Da Checc Vol. 2, Born 2 Win establishes the young rapper as the next heir to the Latino L.A. rap tradition that started with Cypress Hill 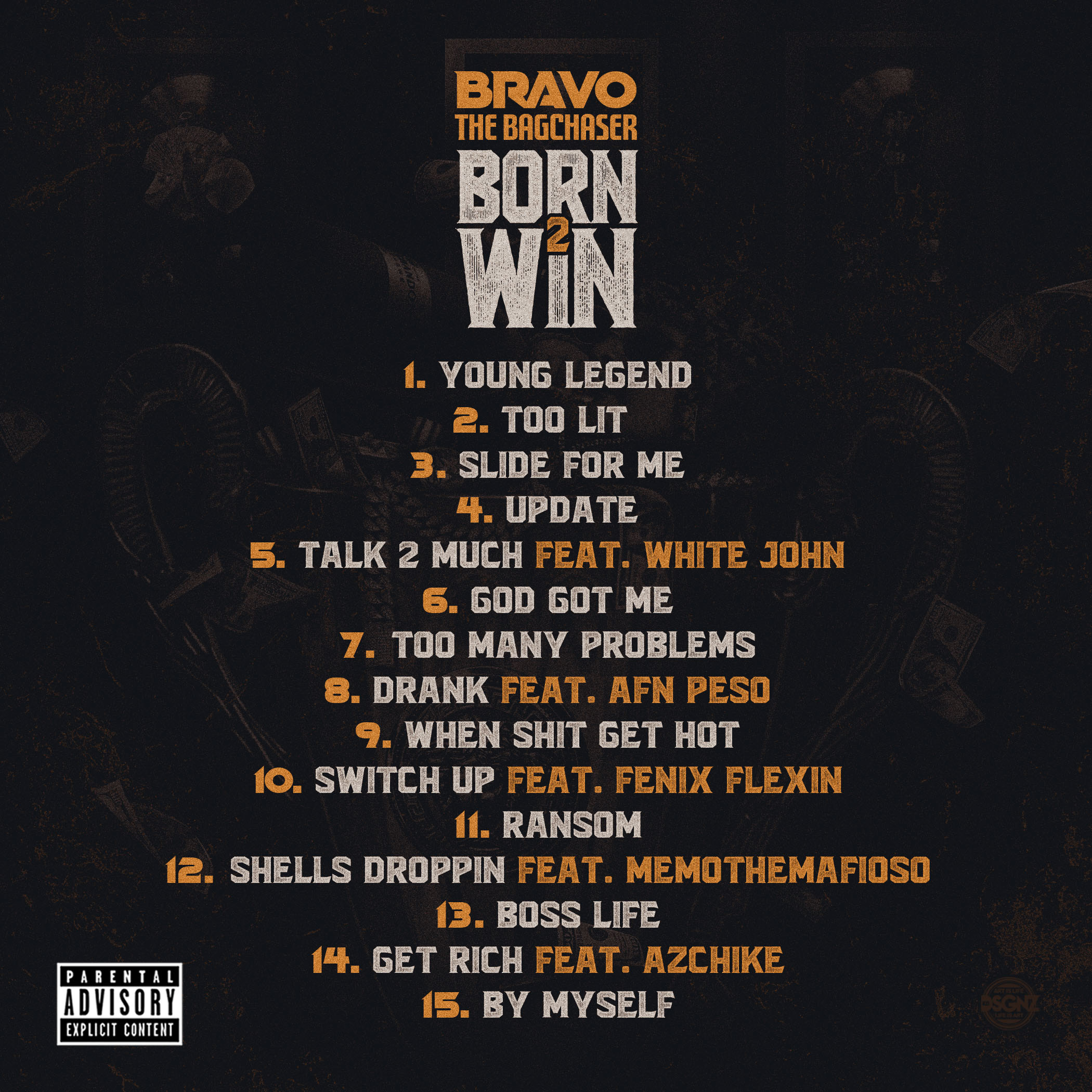 Bravo The Bagchaser is relentlessly racing to greatness, speeding down the lane legends like Cypress Hill and more recently, Shoreline Mafia, opened for Latino artists from L.A. to flourish in mainstream rap culture. For the past 3 years, Bravo has built a cult fan base by consistently releasing heartfelt music, street bangers with captivating visuals. Songs like “Bag Right”, “Bravo Flexin”, and “Trappin N Servin” have racked up over millions of views on YouTube. He’s opened up for acts such as Shoreline Mafia, Rucci, AzChike, Cypress Moreno, Mike Sherm as well as headlined his own west-coast tour with Fenix Flexin’ of Shoreline Mafia in February 2020.